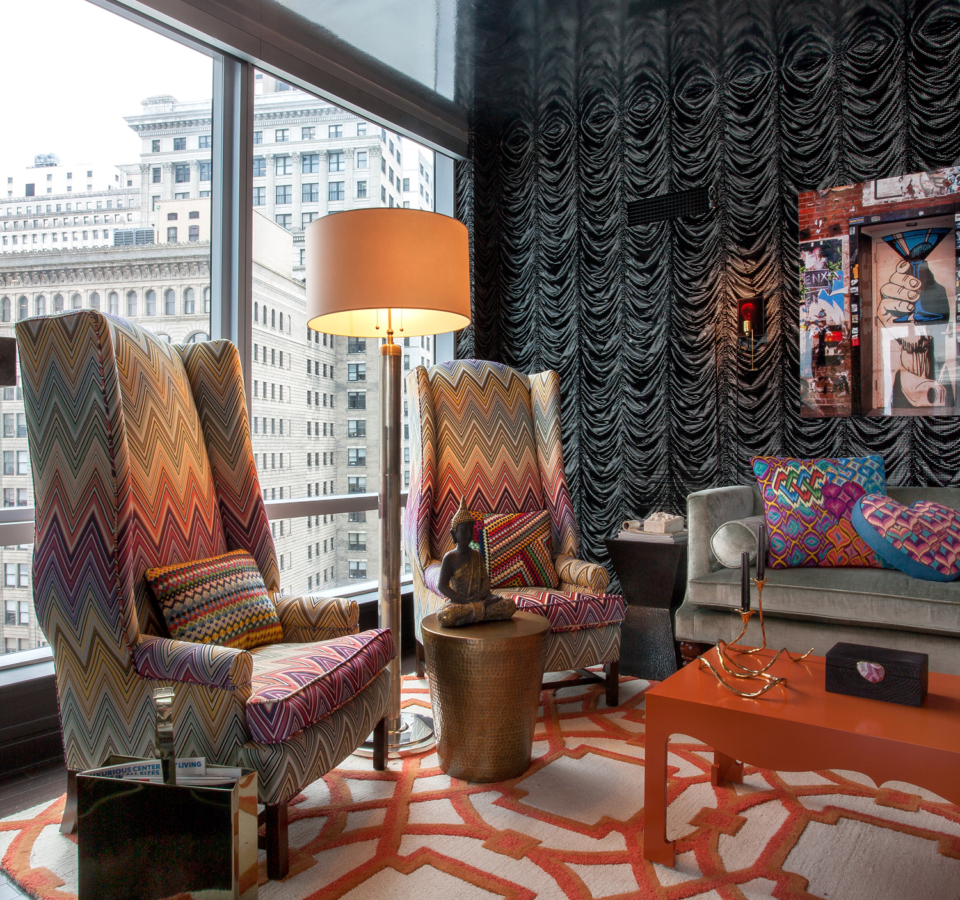 Little else seems to touch a nerve the way that the mere suggestion of hanging wallpaper does. The expressions I get in response range from, Wallpaper? Really? to Nope. No way. Sorry. And underneath, there’s always a very concerned scowl, like I just stumbled some upon some deep-seated memory that was consciously buried under decades of far less threatening thoughts.

I get it. I really do. I grew up in the seventies, when gaudy was pursued with every bit the mania that farmhouse is today. The louder, the more obnoxious, the better. And wallpaper was the canvas that punctuated every last brown and gold accent. We didn’t know any better then. I’d like to think that our parents didn’t, either. But as we matured into people with our own personalities and tastes, we started to look around and realize just how criminal our parents’ tastes were. And those moments scarred us for life.

In the years since, it’s been drilled into our heads by DIY TV shows, home design magazines, and Home Depot commercials that paint is a homeowner’s best friend. Nothing transforms a space as quickly and easily as paint. And since the only other alternative, really, was wallpaper, we happily bought in. But—I’m bracing myself as I type this next part—wallpaper is starting to have a comeback, in part because we’re in desperate need for another option to dress our walls. And wallpaper is satisfying that urge—much as I hate to admit it—to push past the conventional boundaries a bit, just as it did with our parents.

Going from taupe to navy is likely going to breathe new life into your tired, little study. Now, imagine hanging wallpaper instead of repainting it. And imagine that wallpaper is a deep mahogany (faux) leather. Forget same room, different color. It’s an entirely different space. If that feels like a huge leap, stay with me. We’ll get there together in a few short steps.

Mainstream luxury
The stigma’s gone from synthetic textiles. And that’s because they’ve come a long way—light years—over the last few seasons. You wouldn’t balk at throwing on a Stella McCartney knitwear combo or carrying around one of her alterna-leather shoulder bags. So why would you shy away from some seriously trending flock wallpaper? It’s having a moment—a rebirth, rather—for the same reason Stella’s perched at the top of fashion’s hierarchy right now: The materials are elevating the design. There’s ingenuity not just in the way they look but in how they feel and move, too. You may recognize some of the flock patterns from your childhood, but I promise you this is not the same wallpaper. Interwoven metallic threads add dimension, not to mention glamour, synthetic fabrics add durability, and at no cost to the appearance. My example, a paragraph ago, with the leather wallpaper, wasn’t named at random. It’s true across the board, but especially so with the leathers; the difference between real and synthetic is almost imperceptible. Save for the price tags.

What the flock?
Let me take a step back for a moment. Flock wallpaper, in case you glossed over it in your aversion to all things wallpaper, is the garish stuff that most of us grew up with. It’s back—in updated colors and patterns—because bold patterns and loud colors are about as hot as it gets right now (as in 2018, not January). And the more disjointed the contrast between paired patterns, the better.

Approach it like you do your wardrobe. In other words, after a couple of years, prepare to update the look. Hanging flock wallpaper is, essentially, embracing the moment with a big ol’ bear hug. It may have a short shelf life, but what a life!

That said, flock isn’t reserved for the extroverted among us. An accent wall can be just as transformative for a room as covering all four walls. There’s also, of course, a healthy range of much more subdued, never-goes-out-of-style patterns among its ranks. Where’s the fun in that, though?

The advanced course
As much as I work with it, the closest I ever come to hanging wallpaper myself is calling a professional to schedule a time for him to do it. You may be a seasoned do-it-yourselfer, but this is the kind of thing, like replacing an electrical panel, where you can get in over your head before you’re even done prepping. In old homes, lines are rarely straight. And even when they are, your eye isn’t. Spare yourself the frustration.

Once that first room’s done, don’t be surprised if you begin seeing your entire home differently. Hanging wallpaper’s kind of infectious like that. I’d never dare suggest it at this early, cynical point, but once you wade in, let your imagination roam. As in, consider the ceiling, too. I recently found this wallpaper that’s covered in plates, and I think it may be a perfect fit in our kitchen, where the walls are already covered in my plate collection. That way, it’ll look really clutter-y and more than a little disorienting. Basically, forget everything you think you know about hanging wallpaper. With this brash, new generation of it, there are no rules.