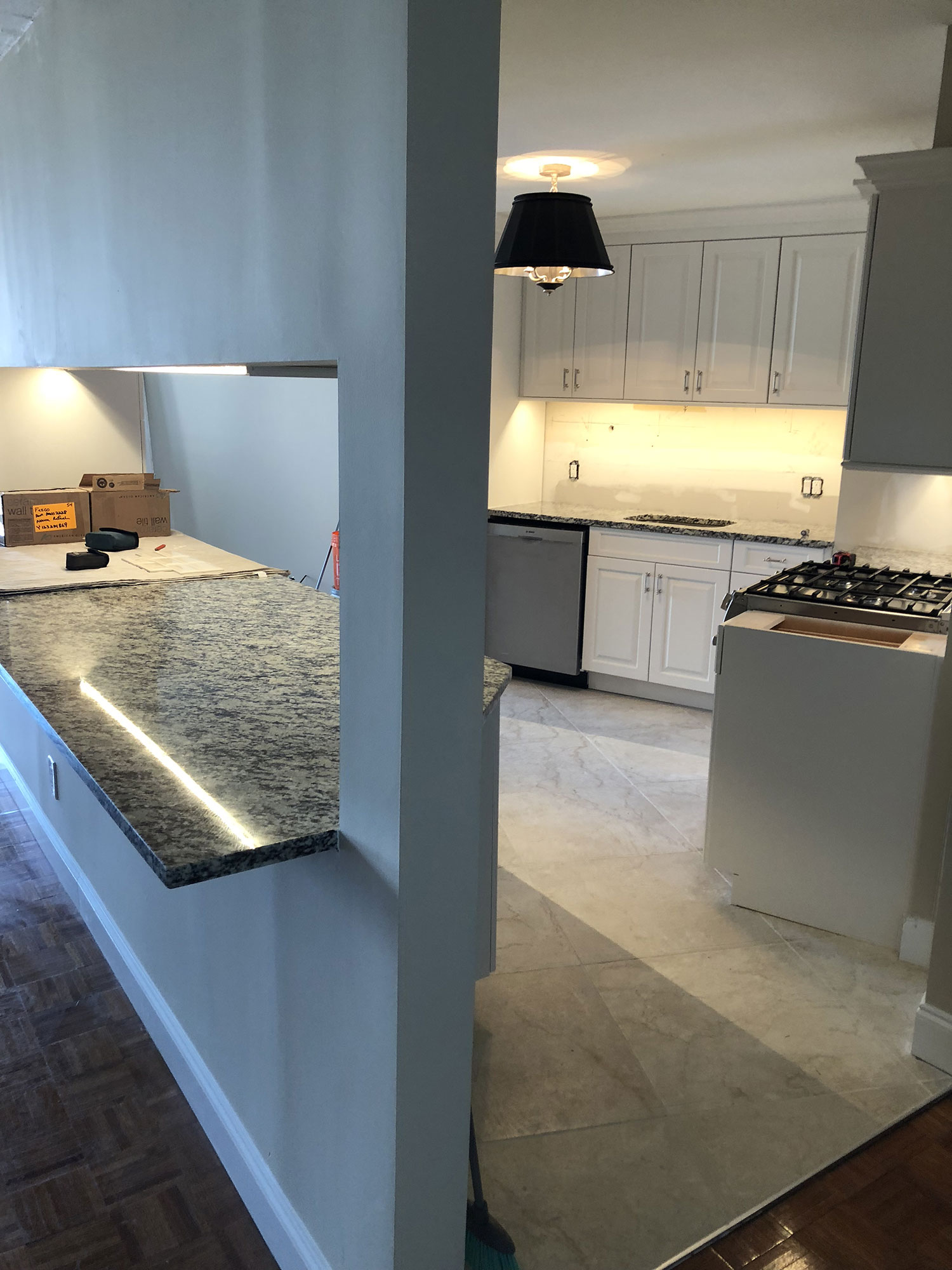 Some of my favorite makeovers were the most troublesome ones at the onset. Take one of my latest projects as an example. The floorplan is outdated and uncompromising, the budget is tight and just as uncompromising, and, because misery invites more misery, the entire condo needed to be renovated and outfitted in less than two months.

The Philadelphian, where this 1,200-square foot condominium resides, sits in a prime location, right off of Kelly Drive and within shouting distance of Boathouse Row, the Schuylkill Rowing Basin, Fairmount Park, and the Philadelphia Museum of Art. In its day, it was the height of condo living in the city. The laundry list of amenities includes indoor and outdoor pools, on-call housekeeping, its own grocery store, and a complimentary shuttle to Center City. The trouble is, that day was more than 40 years ago.

Paring down
The Philadelphian, today, isn’t quite as sleek or as accommodating as the newer residential buildings around the city, but it’s still got that location. And, as real estate brokers are fond of saying, that’s what matters most. I tend to agree. Everything else can be improved, but you’re never going to be able to enhance the view or the accessibility to the best of what’s around you.

So, with that mindset, we began pulling out almost everything we could. The kitchen and master bathroom were stripped to the studs. All of the electric and flooring came out, too. We didn’t knock down any walls, so there weren’t any significant changes to the condo’s architecture. But, we cleared out almost every other relic from its prior existence.

The new interior design is something I’m describing as traditional in transition. Essentially, I’m taking some traditional elements and featuring them in contexts that are very much of the moment.

In the living room, for example, the furniture features hints of driftwood gray, aqua, and champagne, a lighter palette that positively pops against a dark rug. The rug also has the effect of enlarging the room. Floral-patterned pillows provide the accents and help tie the living room into the dining area. It’s not a large space, so I had to get creative with the layout. On a day-to-day basis, there will be three chairs around the dining table. But, for dinner parties, there’s enough room now to accommodate as many as 12. Those other chairs will be pulled from all over, including the living room.

The eclectic look of different kinds of chairs (and a couple of ottomans) is page right out of the modern designer’s style guide. I’m even happier, though, about the super-efficient use of the space. That, right there, is the essence of modern living.

You don’t need to abandon your identity to live in a modern home. Really, it’s just a matter of updating your living spaces so that they don’t begin to feel stale. Sometimes, a fresh coat of paint in a trending color or a new, contemporary wallcovering is enough. Other times, you’ll need to be more invasive, because it’s about function as much as the look; your home needs to evolve with your lifestyle.

Walls aren’t everything
It’s not that abnormal. If you went strictly by what we see on TV anymore, then, sure, the retrofitted modern home is an open space, and many walls were likely sacrificed in its making. But, the reality is, knocking down walls costs a lot of money. Not to mention, in apartments and condos, like this one, it’s often not even feasible. So, updating and upgrading an existing space is a familiar place for me.

Is it constricting? Totally. But, as creative types are fond of saying (after they’ve found their way to the other side), the limits are what inspire innovation. I believed that myself right up until the building’s management asked us to install the new washer and dryer according to the current code, when the set we were swapping out had been there, I’m pretty sure, since the first Bush presidency. There was no innovation there; just a giant headache.

Playing up the view
But, even that, I’m sure I’ll laugh to myself about as soon as I hand the keys back over to my client. By then, I’ll have taken a condo that felt like the walls were closing in and reshaped it into a living space that’s open, uncluttered and accommodating. The view’s still going to be there, of course, but now, instead of feeling like the one and only focal point in the place, it’ll become a fitting backdrop to a home that’s filled with lots of points of interest and unobstructed views from which to take it all in.

Amenities, after all, are great, but home is where the heart is. If you’re at peace there, life has a way of falling into place within its walls and everywhere else.