Behind the Scenes with a Commercial Interior Designer in Bucks County 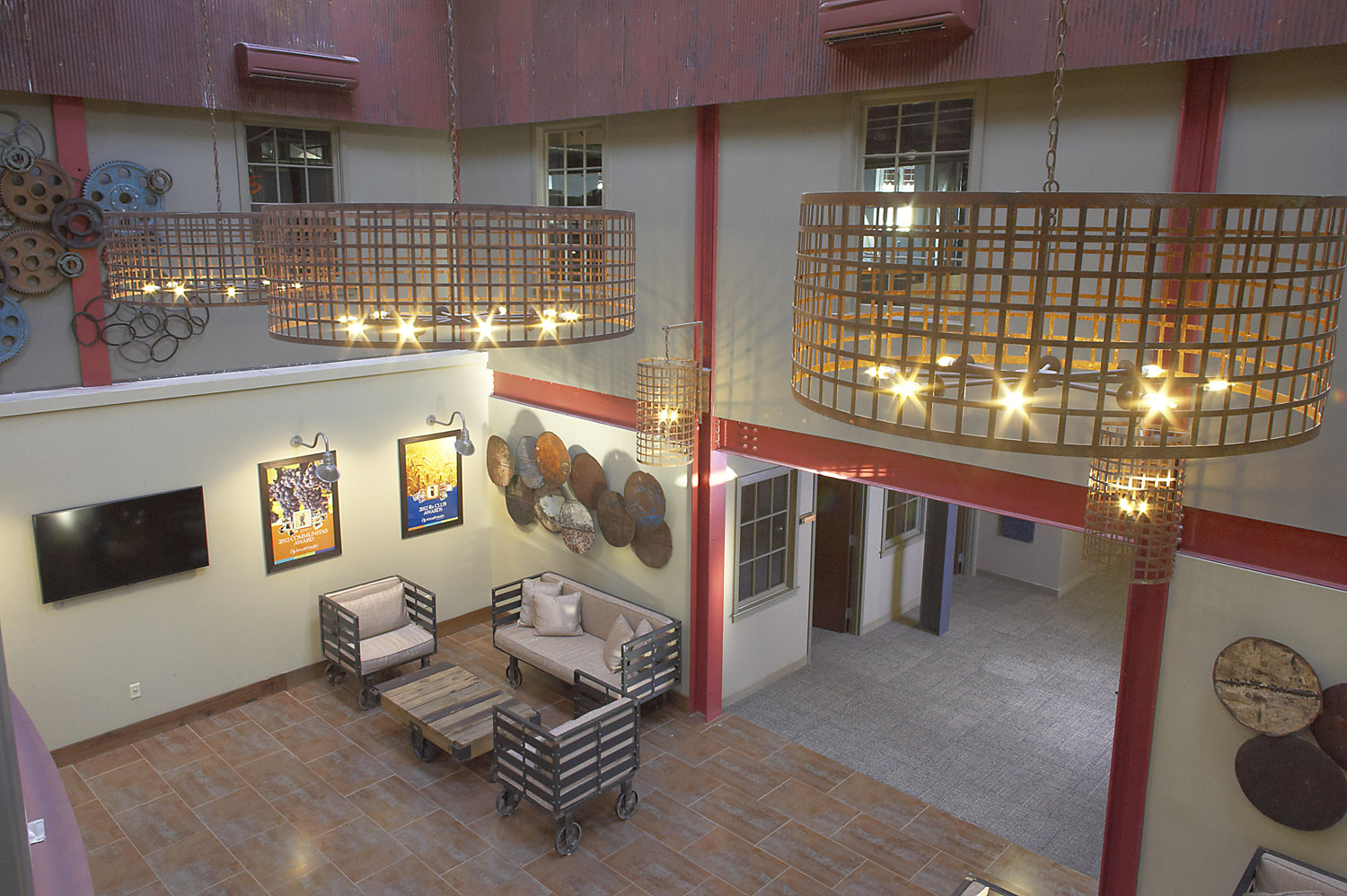 A recent project illustrates just how imaginatively offices are considered these days. As a commercial interior designer in Bucks County, Philadelphia, and the surrounding regions, I’ve come across my fair share of sterile cubicles. But The Feed Mill Station in Flemington, New Jersey, offered something fairly unique: A blank canvas.

The building—and it is an actual former feed mill, silos and all—was destined to become the new headquarters of Artcraft Health. But when the company bought the building, it was just a shell. The previous occupants had abandoned their renovation, it appeared, right after the demolition phase, so it was pretty much just studs, rafters, and concrete floors. There were, however, plenty of remnants of the building’s original iteration. My aim was to preserve as much of that character as I could, which meant, in most cases, leaving those rafters and the ductwork that would eventually be installed exposed and keeping the floor plans open, not sectioning them up into rows of individual offices.

Artcraft wanted a modern office in the mold of the kind that had come to occupy so much of Silicon Valley: casual, relaxed, conducive to spontaneous gatherings, rich in amenities. The kind of place, basically, you didn’t want to leave during your lunch break or even at the end of the work day. My job as a commercial interior designer in Bucks County was to adapt those experiences to a non-millennial, though very much creative-based, company and a region where retrofitted offices are the norm, but banks of overstuffed pillows that double as conference rooms are not. What I came up with was a spin on the farmhouse-industrial aesthetic that took advantage of the building’s inherent character and fostered the unconventional environmental the client wanted.

Unique as the building itself is, it’s the front desk that steals most of the attention. It looks like it was transplanted from a Depression-era factory. The base does, at least. The massive steel coil extending from the top of the desk to the ceiling above it transforms it into a piece of modern art. I had this idea for a huge, heavy hunk of steel anchoring the wide-open space and tying together all of the other steel, wood, and corrugated metal around it. I came up with a rough sketch and took it to a metalsmith I’ve been working with for over 15 years, and he ran with it. He does a lot of technical work, so when I come to him with a design, his eyes light up. He also ended up crafting several other pieces of furniture for the Artcraft office, including the sofas and Corbusier-style chairs in the lobby and some tables made from recovered machinery gears.

Matching the brand with the office’s aesthetic; that’s usually the hardest part about being a commercial interior designer in Bucks County and, I imagine, anywhere else. It’s because it’s almost always the office that makes the greater sacrifice in that compromise. But here, the two ideals aligned almost seamlessly. Modern may not be the first thing that comes to mind when you think retrofitted farm building, and yet the end result is the height of avant-garde. It’s not a modern office in the Silicon Valley sense. But that would look unnatural around here. We highlighted what we liked about the concept and the space and made them our own. That’s Interior Design 101.