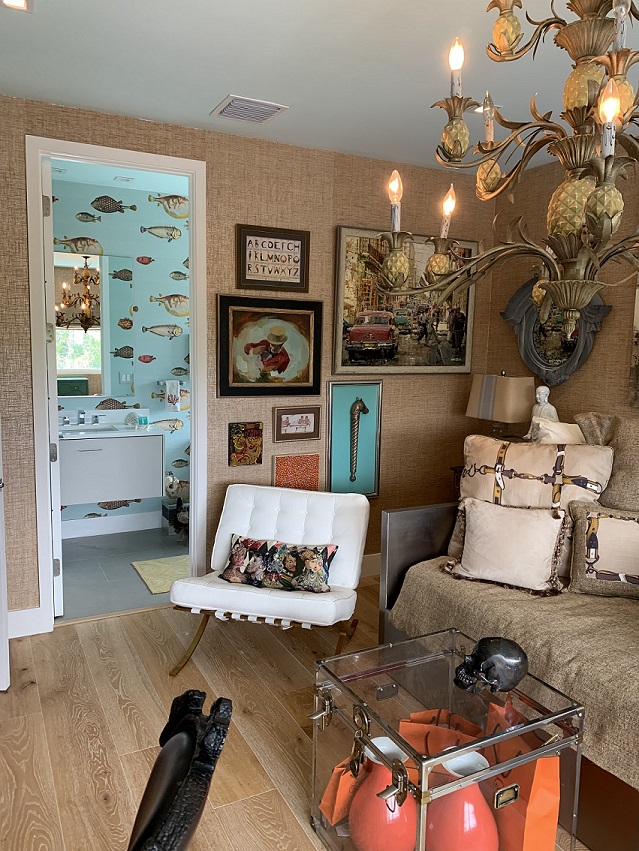 My partner and I, we’re impulsive. I’m just going to say that right at the top. If I don’t, I worry that the premise for what follows will feel a bit … much.

Three years ago, we were visiting friends in West Palm Beach, Florida, a city that’s easy to fall for. They suggested we check out a new residential community that was being built around the corner from our hotel.

We passed under a little archway and suddenly, we were in the middle of this enchanting neighborhood made up of art deco-style townhomes, a look that’s synonymous with the area. There was an end unit with a small yard and a FOR SALE sign out front. We called the number that was listed on it and put in an offer. It was accepted.

That was only the beginning, of course. The home was a blank slate. The idea of making it our own was as exhilarating as it was daunting. Good thing I had no idea at that point that a pandemic was looming, and it was going to turn our already-sizable undertaking into a multi-year marathon.

Three bedrooms and three full bathrooms are spread across two floors upstairs. Downstairs, on the main floor, there’s a living room with a sky-high ceiling and tall windows, an ample kitchen with a massive island that reaches all the way across the space, a modest dining area, and a powder room. All told, the home is about 3,000 square feet.

On the other side of the large sliding doors leading from the living room, there’s a plunge pool surrounded by an intimate stone patio with sufficient room for a few lounge chairs and a dining table.

Our initial goal was to get just enough furniture in every room to make the home livable. We were so excited; we wanted to start spending time there as soon as we could.

When we returned to our primary home in Bucks County after buying the West Palm Beach townhome, we put our Philadelphia apartment on the market and shipped a bunch of furniture from there down to Florida.

Before we did that, though, we took a floorplan of the new townhome and mapped out which furniture would go where. So there was intention right from the beginning. Once those pieces were in place, it helped us see what else we needed. There was still a long way to go, but we were moving now in a more-specific direction.

An amalgam of interesting contrasts

West Palm Beach is an antique-lover’s paradise. There are more than 40 shops on Antique Row alone, many of them with formidable collections. There was one, however, Silvia Petroccia Antiques & Interiors whose every piece felt like it was hand-selected for us. We quickly fell in love with Silvia herself, too.

Over the next couple of years, the three of us developed a symbiotic relationship, in-person and from afar, with us updating her on the progress of our renovation and discussing our latest ideas for it and her steering us toward specific elements that sounded like they could be a good fit.

It’s hard to articulate a central aesthetic for our new home. At turns, there are nods to ancient Rome in the form of frescos and various statues. But, from other angles, it also feels undeniably modern.

Design schemes for vacation homes tend to be pretty simple, understandably. They’re meant to be places that offer a reprieve from life’s daily stressors, not a whole new source of them. But, while I’d like to think of my aesthetic as inclusive, match-y-match-y has never been my thing.

In fact, the new townhome lands squarely on the other end of the spectrum, with lots of interesting contrasts. In the living room, for example, an early 19th-century hand-blown Venetian chandelier coexists with Ingo Maurer sconces. A (very) limited edition coffee table by architect Gio Ponti and designer Piero Fornasetti is flanked by a futuristic, black-hooded chair and a couple of Louis XV chairs upholstered with Christian Lacroix fabric. The result is colorful and conversation-inducing.

It might seem like there’s no real rhyme or reason to the design, but there is: This is the furniture and art that we love. Each piece is a reflection of a different aspect of our personalities. And taken together, it’s a representation of us as a couple.

Shopping here and there

Hanging wallpaper wherever we could also went a long way toward giving each room its own unique identity. Every room (including many ceilings) and hallway has a different wallpaper. We even placed it on the staircase risers.

Another bedroom is inspired by the iconic Colony Hotel, which was our favorite place to stay until we became Palm Beach residents. A bold green-and-white-stripe wallpaper complements bedding that’s decked out in watermelon-colored stripes. Both are sharply contrasted – but also balanced – by the headboard, an accent wall, and window treatments that feature an Asian tiger pattern in the same colors.

It might seem like there’s no real rhyme or reason to the design, but there is: This is the furniture and art that we love. Each piece is a reflection of a different aspect of our personalities. And taken together, it’s a representation of us as a couple.

For about a year, we managed what we could from Bucks County. Then, last March, we were finally able to return to the townhome. We spent two-and-a-half weeks trying to make up for lost time.

When we visited again in September, almost three years after when we bought the townhome on a whim, it was the first time we had the whole house to ourselves, not a contractor in sight. We dropped our luggage and tried to soak it all in. Because it’s been such a long haul, it still hasn’t quite set in that we can relax and start thinking of this place as home, rather than merely a work-in-progress. But, then, I’ve never been particularly good at that part.